Visit our YouTube Channel to watch all the videos we have collected over the last 20 years.  Experience an introduction to our restoration forestry, or learn about the Redwood bench that President Obama gifted Chinese President Jinping.  You can even find a funny video by one of our clients on how to assemble a table.

Our customers are the best. That's why we take so much pride in building the best Redwood furniture money can buy while saving and restoring the forests for future generations. We often hear back from satisfied customers to let us known how their furniture is doing. Check them out here and contact us with your comments so we can add them to the mix!

Interview with Forever Redwood CEO Raul Hernandez. Filmed in Atlanta on September 20th, 2021. These interviews were part of 2 episodes for the Garden Smart TV program to be aired on PBS in April 2022

Rio on the Hudson - Olympic Event

Forever Redwood built a 50' long pavilion for the Rio on the Hudson Olympic event on Pier 26 in Manhattan. It was a rush job, and we got it done the day before the Olympics began while other folks simultaneously built out the bar and cafe area underneath the pavilion. Below are a couple of video links talking about the event with our pavilion in the background used as the bar/cafe area with wide screen televisions.

Recorded phone conversation between founder Raul Hernandez and author Marco Morelli in April 2011 discussing global warming and how Restoration Forestry can play a key part in cooling the earth.

Listen to the Conversation

Raul's call-in interview on Earth Matters, a public radio show. The interview was conducted in October 2008.

Listen to the interview

This video aired on KFTY Channel 50 in Sonoma County in August, 2004.

In 1943, American and Japanese forces fought for 20 days in Attu, Alaska. This U.S. Forest video commemorates the sacrifices and shows the ceremony on the site overlooking the battle site that includes two Forever Redwood VA Benches built for the site.

In late May, we received a phone call from the Office of Protocol at the U.S. State Department. Redwood only grows natively in the U.S. and in China, and so we were chosen to build a custom bench for President Obama to present as a gift to President Jinping of China. Many details went into it, from incorporating the number 8 into the design (because the Chinese believe it is an auspicious number) to engraving in both English and Chinese. It was a sprint job that had to be designed, edited, approved and installed in days. We received press on Saturday June 8, 2013 when both Presidents stood before the bench and sat down for a symbolic photo. We are honored to have participated in this process and thank the State Department for their trust in us. 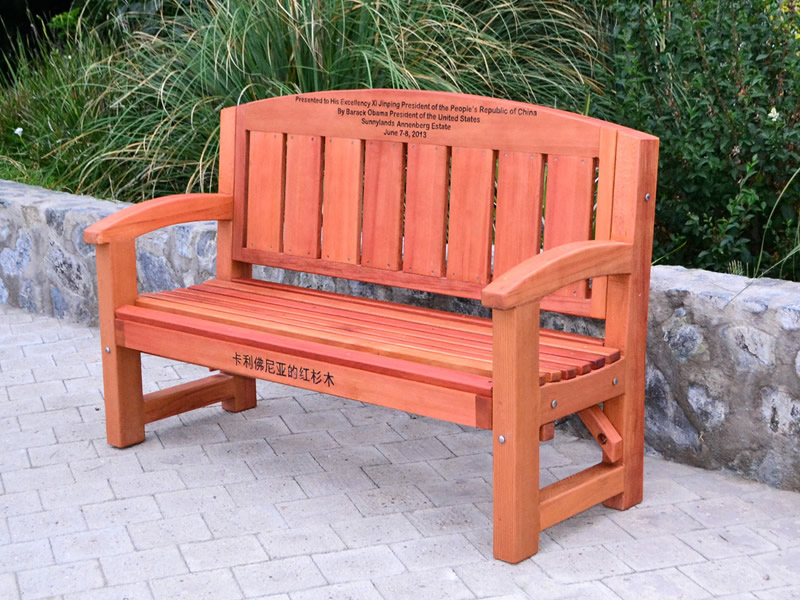 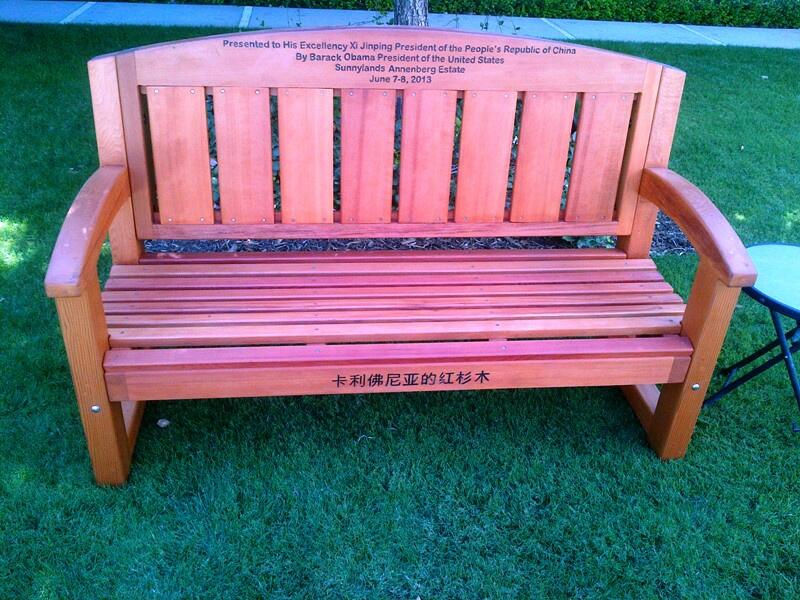 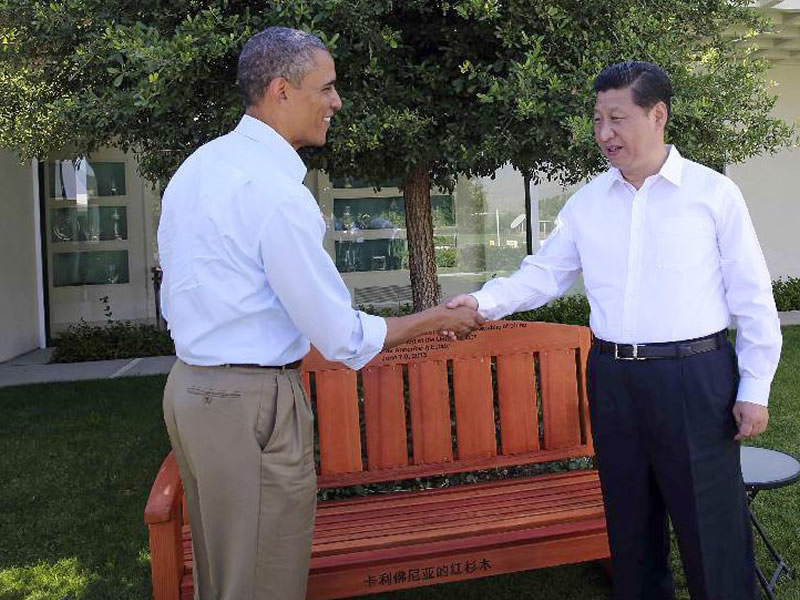 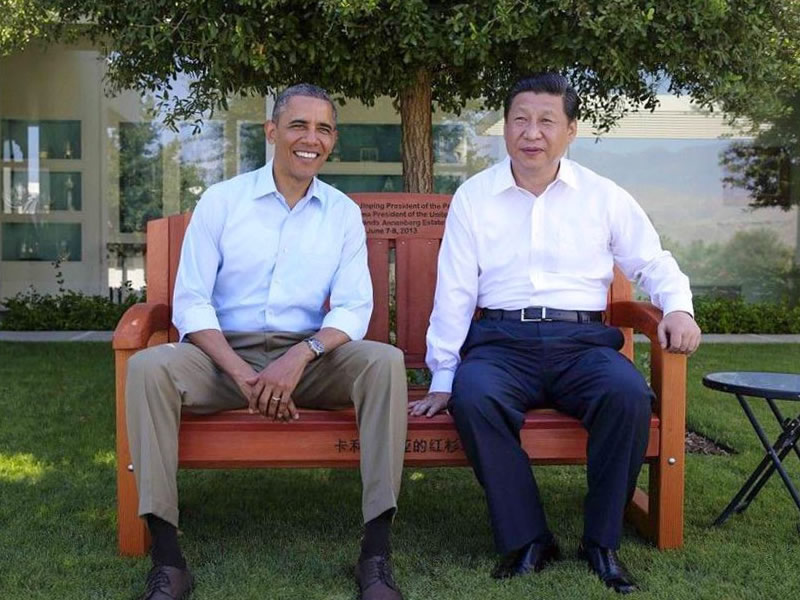 White House Briefing for June 08 where the Forever Redwood Bench is mentioned between minutes 22 and 25 as a symbolic gift and representation for deepening relationship between the U.S. and China.

Letter from THE CHIEF OF PROTOCOL WASHINGTON 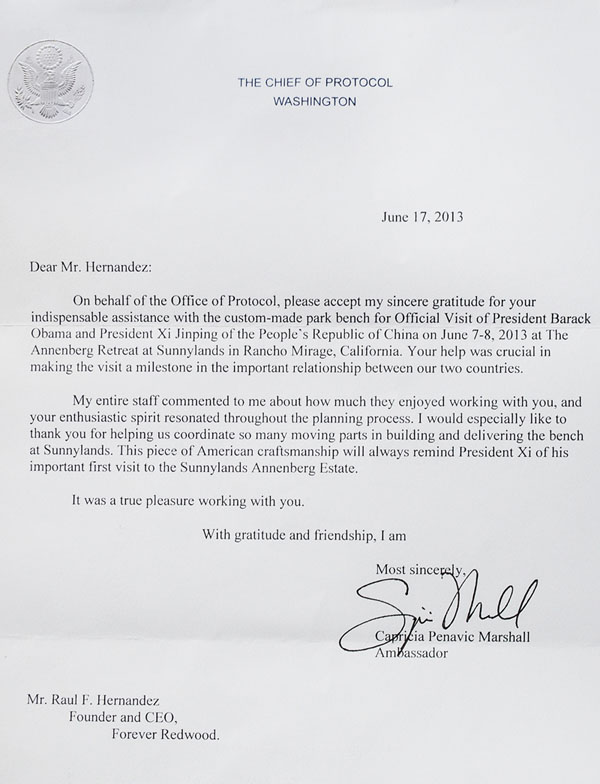 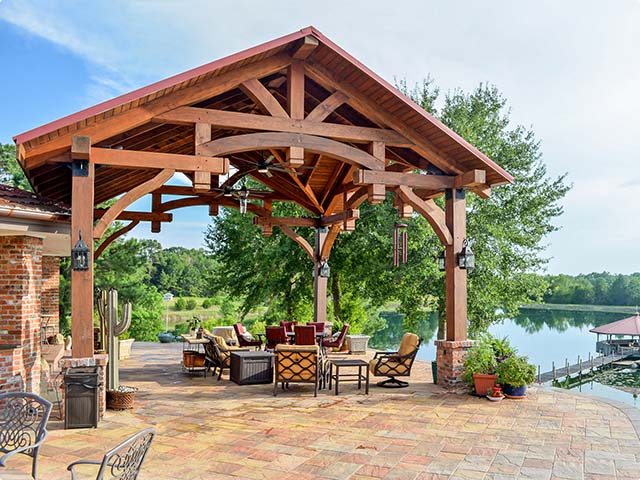 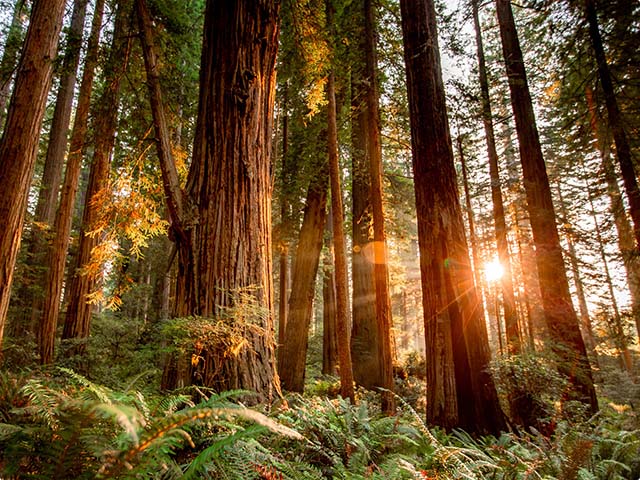 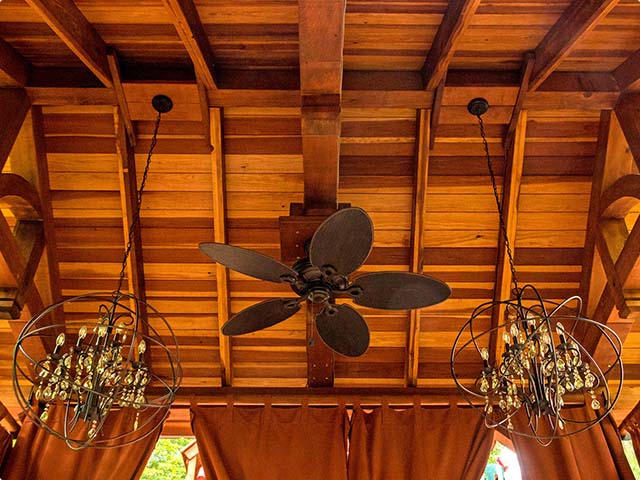 Have Questions? Reach Us Anytime