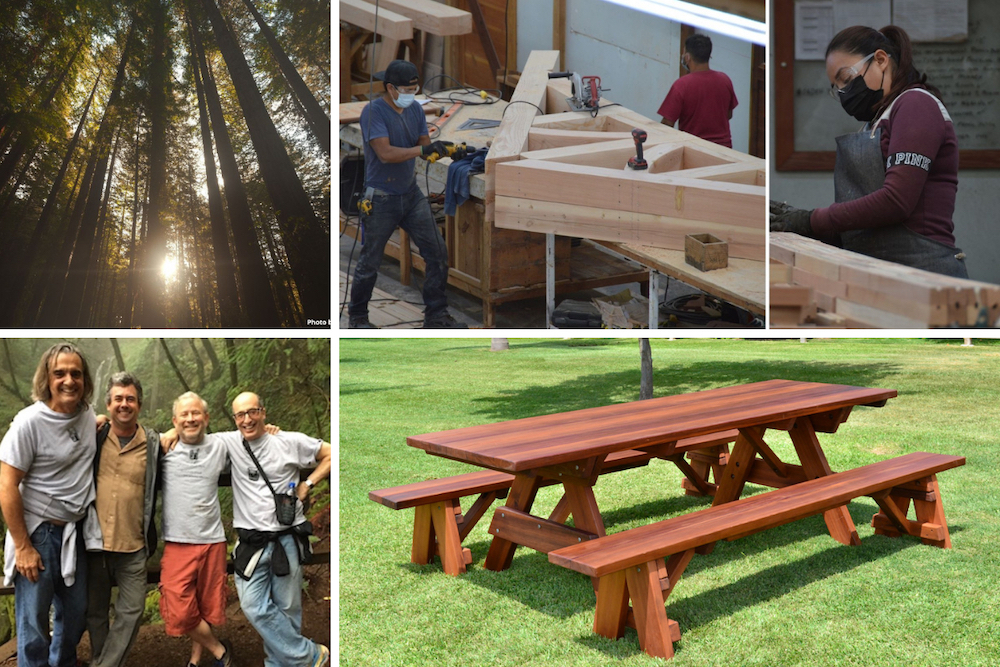 In 1995, when Raul Hernandez began the backbreaking work of restoring a parcel of Redwood forest, he had no idea it was the start of a 25-year journey that would shape him into an eco-entrepreneur, restoration forestry expert, manager of over 240 acres of forestland, and CEO of a furniture and shade structure company.

“You start something and it completely changes you,” Raul said during a recent phone interview. “It has its own life.”

The journey actually began a bit earlier, with four friends and a deep love of the Redwood forests. With little experience, minimal capital, and an abundance of heart, Raul, Frank Marrero, Ian Morris, and Terry Patten teamed up to restore a parcel of forestland in northern California which had been ravaged by the logging industry in the 1960s and ‘70s. “Aggressive logging changed the structure and composition of the Redwood forest,” Raul explained. Without the huge, old growth Redwood trees, the hardwoods proliferated and the Douglas fir grew dense and scrawny, creating a fire hazard. The few residual Redwoods sprouted but where once a single large tree dominated, now ten small ones crowded the space. At the start of the rehabilitation, tree density averaged over 1,000 trees per acre in many areas. A mature or Old-Growth forest often has less than 100 trees per acre. BEFORE THINNING (left): 40 years after industrial logging, the “cathedral ceiling” is an impenetrable maze of branches. AFTER THINNING (right): Rehabilitation is underway. Some of the trees will be thinned further to add growing room for the healthiest trees.

The grueling, hands-on work entailed plunging into thickets of trees, identifying the healthiest, and cutting down the rest so that adequate light, space, and nutrients could restore the Redwood trees and rebalance the forest. For every four trees assessed, three were felled. A side business soon sprang up, selling firewood from the culled trees. From 1995 to ‘99, the restoration work was sustained in part by the proceeds.

During this time, hunkered in a rustic barn they’d erected on the property, Raul began drafting a restoration forestry manual on a laptop donated by Terry. His vision was to communicate the urgent need for this work while providing the tools and knowledge to carry it out. An important contribution to the field of restoration forestry, the finished manual integrates the hands-on experience he and his partners acquired in the trenches with his own extensive reading and research. It also highlights the extraordinary global cooling capacity of the Redwood forest and offers a model for revitalizing forestlands that is both ecologically and economically viable.

As Ian, Frank, Terry and Raul rehabilitated the 42-acre parcel, they encountered “buckskins,” old growth Redwood logs discarded by loggers on the forest floor. Some of these were left to decompose and nourish the soil, while others were cleared. As the team removed the logs, they were struck by the remarkable quality of the Redwood. They weren’t the only ones. Warren Linney (now a Forever Redwood partner, board member, and VP) recognized the rare beauty of the old growth and contributed a mill to the effort. He was also the first significant investor in the company. The idea was to support the forestry work with old growth lumber sales, in addition to the firewood. As the freshly-hewn lumber emerged from the mill, Warren was captivated by the warm, reddish hues. He propositioned the group — would anyone be willing to build him a picnic table?

Despite a total lack of carpentry experience, Raul and Frank were game, milling the lumber and assembling a basic, perfectly functional picnic table. Inspired by the experience, they snapped a photo, placed ads in the Santa Rosa Press Democrat and San Francisco Chronicle and, in 2000, the furniture business was born. A prototype of the first picnic table (lower left) evolved into today’s designs. The photo of the prototype was taken in 2020 in the barn where the tables were first made.

The newspaper ads triggered a steady stream of picnic table orders even as the restoration forestry progressed. “At this point, Frank and I were running chainsaws in the woods and making the tables. Terry came up whenever he could. I was in great shape!” Raul laughed.

More hands were needed and Tony Toledo was brought on to assist with the forestry work. But after he was waylaid by an injury, he began milling wood and assembling the picnic tables. It soon became apparent that he was a naturally gifted woodworker and different table styles and benches were added to the modest catalog of outdoor furniture. In late 2001, a friend of Raul’s, Paul Hughes, mentioned that his wife, Marilyn, had recently learned HTML. Did Raul need a website for his furniture business? The decision to move forward was a game changer. Over time, the website would exponentially expand access to customers and leapfrog the company beyond the need for a brick-and-mortar retail storefront.

This first website was a simple affair, featuring rectangular and round picnic tables and benches. “It was a whopping seven pages,” Raul said. “We thought it was a done deal.”

Within a week of launching the website, they received an order from a customer in Pennsylvania, necessitating another on-the-job learning experience. “We scrambled to figure out how to assemble, break down, crate, and ship furniture across the country. But we did it.”

The catalog of products grew rapidly. “From the beginning, I told folks we’d build whatever they wanted. By hand.” Raul said. Each time Tony completed a new design, Raul snapped a photo and uploaded it to the website — planter boxes, swings, and, eventually, a pergola.

“I didn’t even know what a pergola was,” Raul said. “Luckily, a friend of mine, Robert Galusha, was a master carpenter. He drafted the design. It took me four days to assemble. I had no idea what I was doing.” The design, the Traditional Wooden Garden Pergola, is still in use today; and pergolas are a top-selling product line. The Call That Changed Everything

In April 2003, as Raul watched CNN coverage of US tanks rolling into Baghdad, his cellphone rang. The caller introduced himself as a lieutenant from the Pentagon.

“What Pentagon?” Raul asked, his eyes locked on the TV.

The caller replied, “The Pentagon!”

Raul chuckled as he recalled the conversation. “I thought to myself, I’m 44 years old. They can’t possibly want me.” He relaxed when the lieutenant clarified the purpose of the call—100 Adirondack chairs were needed for the center court of the Pentagon, ideally from a quality, US-based manufacturer like Forever Redwood.

Raul tensed up again. The order was huge. The single transaction would outstrip sales for all of the prior year. Over the following months, the small team marshalled all their resources, toiling overtime, until the Pentagon order was completed. But the experience sparked a new awareness. “We realized we needed more than a barn with a generator and two guys,” Raul said. The search for a new space was on. Raul and his partners soon discovered that a booming real estate market in Northern California was cost-prohibitive. They widened the search to Southern California where they already had a strong customer base. Additional research edged them just south of the border, an hour from San Diego, and in 2004, they rented a warehouse in Ensenada, Baja California and built a professional-grade woodworking shop.

Today, rather than a “barn with a generator and two guys,” the business operates from a 35,000-square-foot warehouse with 130 employees, including dozens of carpenters and an engineering staff of 15. Wood is sustainably sourced from the 240 acres of forestland managed by Forever Redwood in Sonoma County. The current catalog features 300+ products, including pergolas, pavilions, gazebos, tables, planters, and chairs. Most of the designs are customer-inspired, illustrating one of Forever Redwood’s core tenets—If You Dream It, We Can Build It. Forever Redwood woodworkers, engineers, and administrative staff over the years.

Looking to the Future

The journey hasn’t always been smooth. The 2008 economic crash forced the sale of portions of the rehabilitated forestlands, a heartbreaking decision that still haunts Raul. And like many businesses in 2020, Forever Redwood has had to adapt quickly to remain afloat in the face of Covid, including retooling for a brief period in early May to construct wooden gurneys for a patient overflow facility.

But 2020 also offered unexpected opportunities. A surge in home projects boosted sales mid-year. Strict Covid-safety protocols have kept the company and woodworking shop operational. Worker safety and health will remain at the forefront until the end of the pandemic. Staying safe in the woodworking shop.

When asked about his vision for the next 25 years, Raul grew thoughtful. “My goal is to continue to evolve our product line and grow 40% per year.” His ambitious strategy includes branching into the tiny house market (check out Forever Redwood’s first-ever tiny house design here).

But the real goal, the one that circles back to the start of the journey, is nurturing the forest restoration work and acquiring thousands of new acres for rehabilitation. “Global warming is a serious problem and restoration forestry is a big part of the solution,” Raul said. “It’s a natural technology that will cool the planet and preserve our future.”