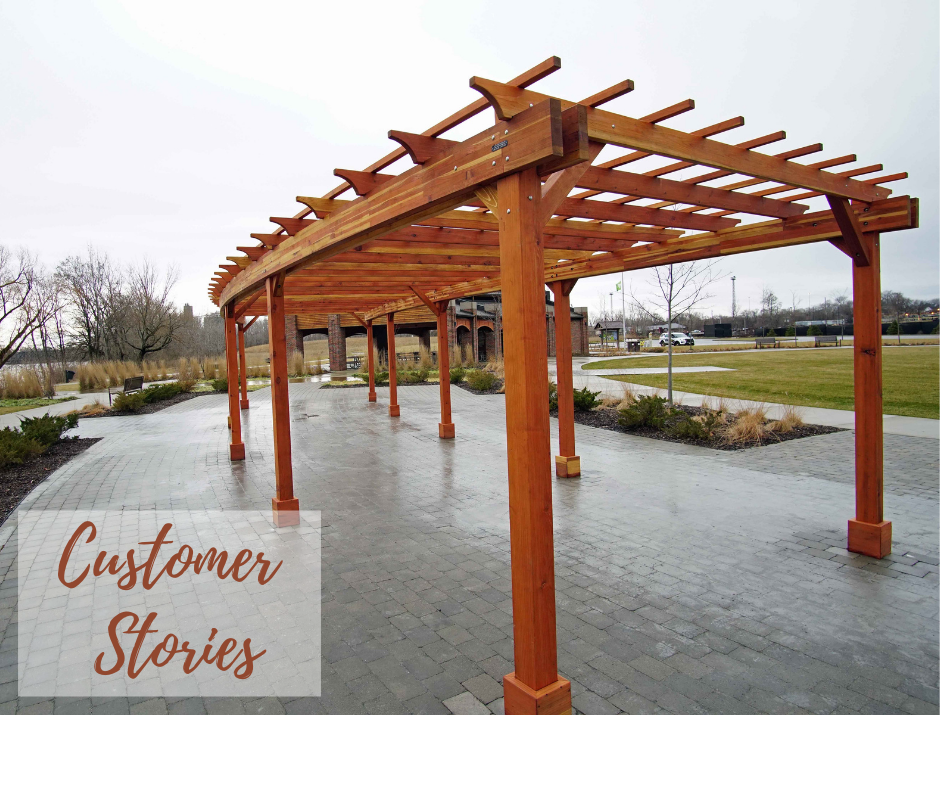 As Regional Manager of Operations for Metroparks Toledo, Chris Smalley’s work is an extension of his values. In collaboration with his colleagues, he creates and preserves public greenspaces, honors local history, and promotes wellbeing for his fellow Ohioans. This beautiful synergy is on full display at Middlegrounds Park, one of the sites he oversees.

Tucked along the Maumee River in downtown Toledo, Middlegrounds is a 28-acre greenspace enjoyed by runners, fishermen and women, dog owners, and cyclists. Red fox, squirrel, and deer sightings are common. The park also offers stunning views of the Anthony Wayne Bridge, a local landmark. “The bridge is such a signature piece,” Chris said during a recent phone interview. “In warmer weather, folks come out to take photos and paint.”

A railroad roundhouse was once situated on the site. In keeping with Metroparks Toledo’s synergistic approach, that history is reflected in the park’s layout and structures, including the Forever Redwood Fan-Shaped Pergola that Chris and his team installed in January 2020.

“Back in the day, the roundhouse was where the railroad would bring the railcars and engines to spin and pivot for repair and adjustment,” Chris explained. After completing a full circle, the restored cars would return to the main track. “When designing the park, we made a conscious effort to keep the roundhouse aesthetic while valuing the open space.” View of the park and the railroad roundhouse footprint from above, before the pergola was installed. (Credit: Google Maps)

The park’s education and event structure, the Rotary Railroad Roundhouse, follows the circular footprint as does the adjacent outdoor plaza. Initially the plaza’s tables were shaded by umbrellas, but strong winds off the Maumee necessitated a sturdier shade solution. As luck would have it, the answer was close by.

“A park manager had installed a Forever Redwood Fan Pergola at Swan Creek,” Chris said, referring to another of Metroparks’s greenspaces. “It looked pretty sharp.” As well, he thought the Fan Pergola’s curved geometry would align with the roundhouse aesthetic of Middlegrounds. After a few email exchanges with Forever Redwood’s design team, Chris embarked on what he described as one of the most fun and collaborative projects he’s ever managed. Alongside the Metroparks planning and construction teams, he and his staff determined measurements for integrating the pergola with the curvature of the park. “We came up with the radius and angles and sent the original site drawings to Forever Redwood’s design team. They were able to overlay the pergola design on top of that. The final drawings specified a 50” L x 13’ W x 9’6” H pergola, with ten anchored posts, in California Redwood with transparent premium sealant. When asked why he chose Redwood, Chris laughed. “I’ll be honest. Each park manager wants their park to be the best. I saw the other Redwood pergola at Swan Creek and thought, ‘I want this—only better!’” In addition to being weather-resistant and durable, California Redwood is a gorgeous, warm-toned wood.

Once the pergola was delivered, Chris and his crew braved the rough January weather to erect the structure. The finished pergola flowed with the park’s existing lines perfectly. Chris was thrilled. “The park, the railroad, the bridge, it’s all a large puzzle. We were fortunate enough to put the pieces in the right places. It’s a great little postage stamp view.” “It was just such a positive experience for me. Every component,” Chris said, reflecting on working with Forever Redwood and his own team. “The pergola fit like it was always supposed to be there. That speaks volumes.”